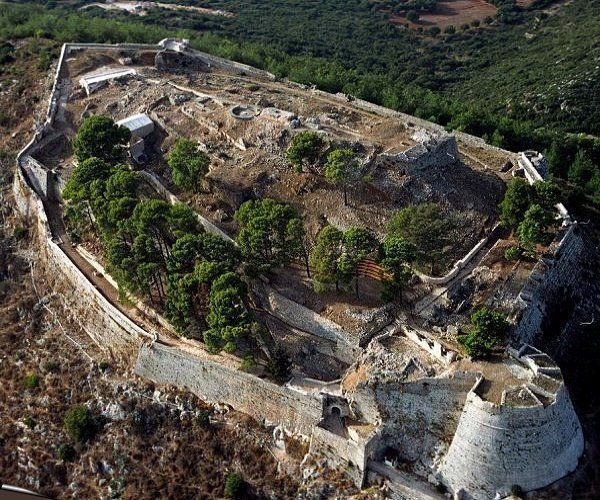 The Saint Jeorge Castle is located on a hill above the city of Peratata. Saint Jeorge Castle was originally built by the Byzantines, but the Venetians gave it its final shape in 1504. The castle is now almost ruined by invasions and the severe earthquake that hit Kefalonia in 1953. 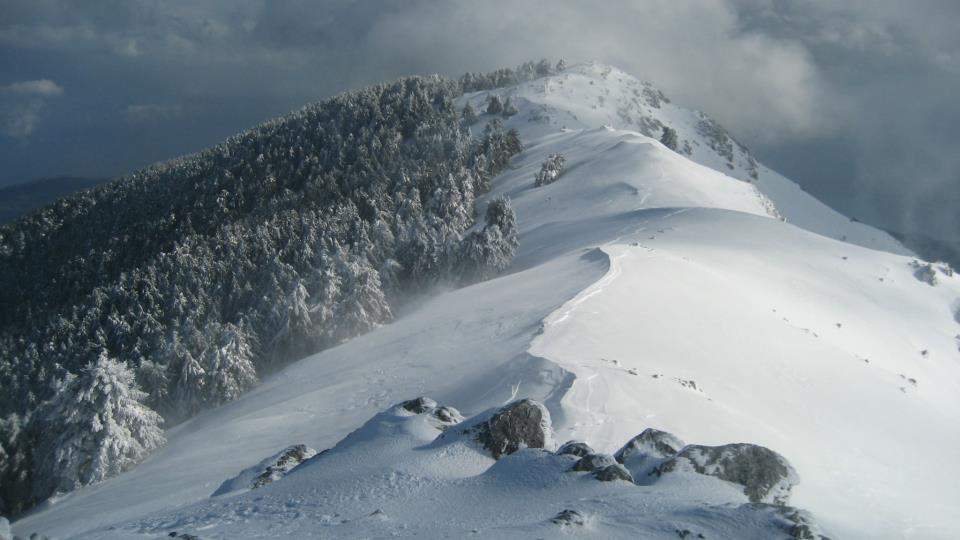 Mount Ainos is the only national park on a Greek island. The park covers 3,000 hectares and its highest peak is Megas Soros, which reaches 1,628 m. The special thing about this park is that a single species of spruce called Abies Cephalonica grows at heights of 600 to 1,600 meters and covers ⅔ of the park area. 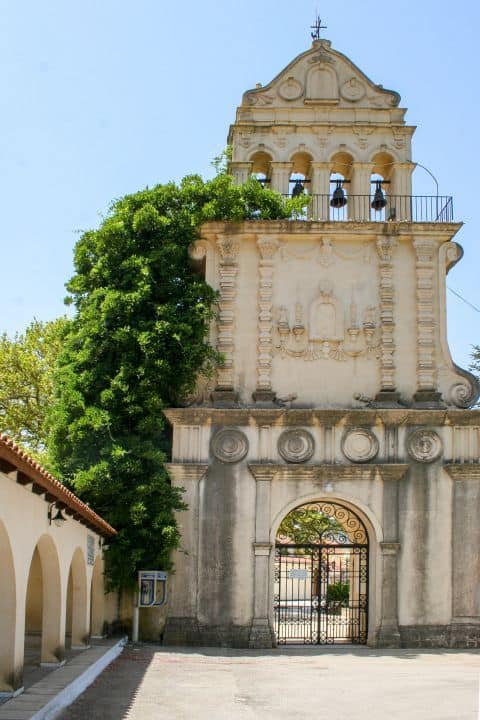 Agios Gerasimos Monastery in Kefalonia, Ionian: Saint Gerasimos, born in Trikala Thessaly in 1503, is the patron saint of Kefalonia. Saint Gerasimos was ordained a monk on Mount Athos, then went to Jerusalem, where he lived for 12 years. He went to Crete and Zakynthos, eventually reaching Kefalonia, where he died on August 15, 1579. He was declared a saint in 1622.

For the first 5 years in Kefalonia Agios Gerasimos lived in a cave in Lassi. This cave can be visited today and offers natural light and sea views. In 1560, St. Gerasimos founded a nunnery in the Omala Valley in central Kefalonia and named it the New Jerusalem. The monastery is located under the imposing Ainos Mountain and near the cities of Fragata and Valsamata. Today the monastery was rebuilt. It is an imposing building with a newly built church. Below the monastery there is a cave with two rooms that used to be the house of the saint. The only way to get to this cave is through a large hole.

The monastery is considered one of the most sacred pilgrimages in Kefalonia and welcomes a large number of visitors. A small church of Agios Gerasimos was built over the tomb and cave of the saint. The saint also planted a banana that is still preserved in the monastery. On the day of his feast, August 16, there is a great litany commemorating the death of the saint, in which his sarcophagus is presented and placed under the banana.

Agios Gerasimos was known for his miraculous ability to heal people with mental illness. Its miracles, widely known throughout the country, resulted in the removal of its relics, which were found to be completely unadulterated. Today his relics are kept in a double glass reliquary above the saint’s tomb. 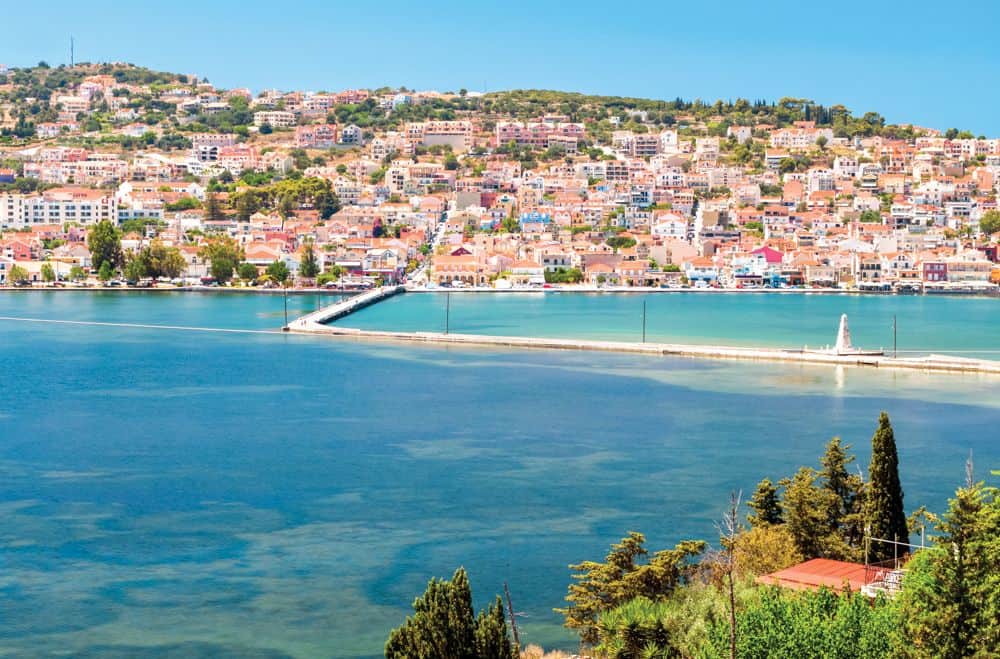 Argostoli Kefalonia: Argostoli is the capital of Kefalonia with 14,000 inhabitants. Argostoli is at the other end of the natural bay, surrounded by mountains and green forests.

The modern and cosmopolitan city of Argostoli is quite busy during the summer season and offers a variety of interesting features and activities. The beautiful asphalt promenade on the coastal road is lined with palm trees and colorful sea pebbles. The path ends at the small ferry pier where boats leave for the city of Lixouri every half hour and where fishing boats moor.

The central square of the city called Plateia Valianou (Plaza Vallianos) is a large and pleasant square with many restaurants, cafes and bars. In the nights the place fills with people who are very warm and friendly. In Argostoli you can see the traditional way of life.

The Lithostroto pedestrian street (cobblestone street) is the capital’s main street full of shops of all kinds. There you can admire the beautiful Church of San Spyridon and the interesting bell tower of Campana Square. There is a range of restaurants in the area to suit all tastes and budgets. Directly above the square is one of the most beautiful places in the city, the lush Botanical Garden.

The lighthouse of San Teodoro is located a few kilometers from Argostoli and was built by British governor Napier. A small round building with white Doric columns known locally as the Fanari. This beautiful lighthouse is one of the hallmarks of Kefalonia. 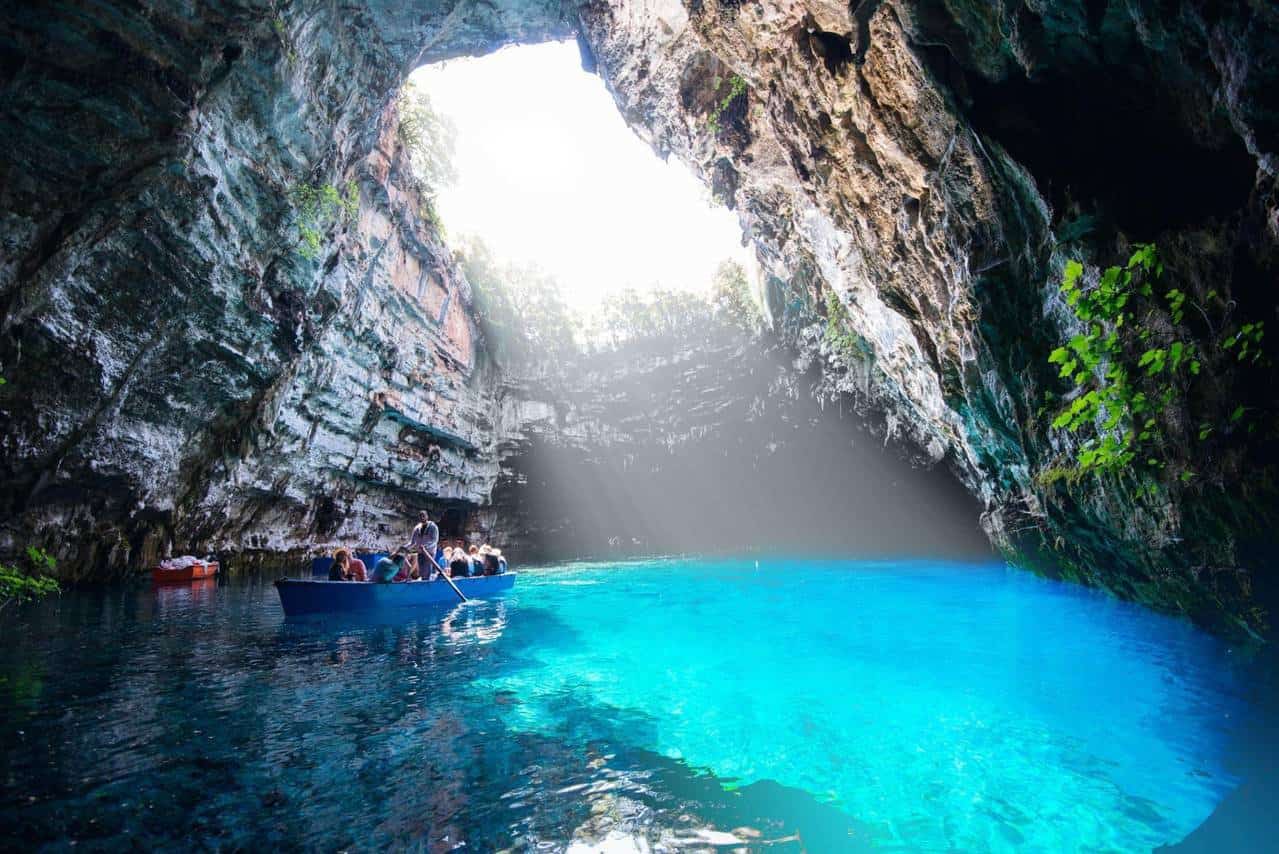 Melissani Cave in Kefalonia: Melissani Cave is on the outskirts of Sami and has a strange charm. It is one of the most important places for tourists in Greece. Surprisingly, there is a lake in the cave that is surrounded by trees and forests. The cave itself is B-shaped with two chambers or corridors separated by land or an island in the middle. The roof of one of the corridors collapsed centuries ago, letting in sunlight. The depth of the lake is 20 to 30 meters. When the sun is high at noon, the sunlight falling on the turquoise blue water creates a magical illusion and suddenly the entire Melissani cave feels illuminated with blue light. 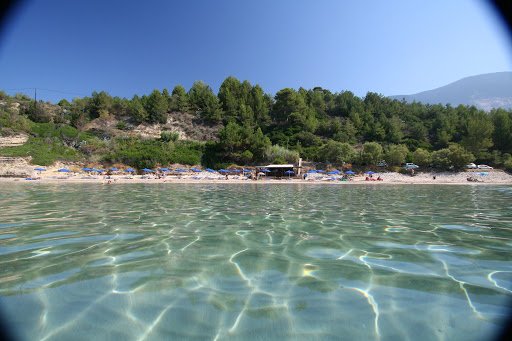 Trapezaki Kefalonia: Trapezaki is a beautiful beach located 3,3 km from Hilltop Resort. The beach is completely untouched and offers an enchanting landscape that captivates all visitors. Certain services such as a mini market and a tavern are nearby. Trapezaki offers places to relax and a noisy atmosphere. The long sandy beach is a great option for a relaxing family vacation. Water sports are also available for all ages. The closest town is Moussata which is only a few minutes drive away. The landscape is great for hiking and for finding the local slopes. 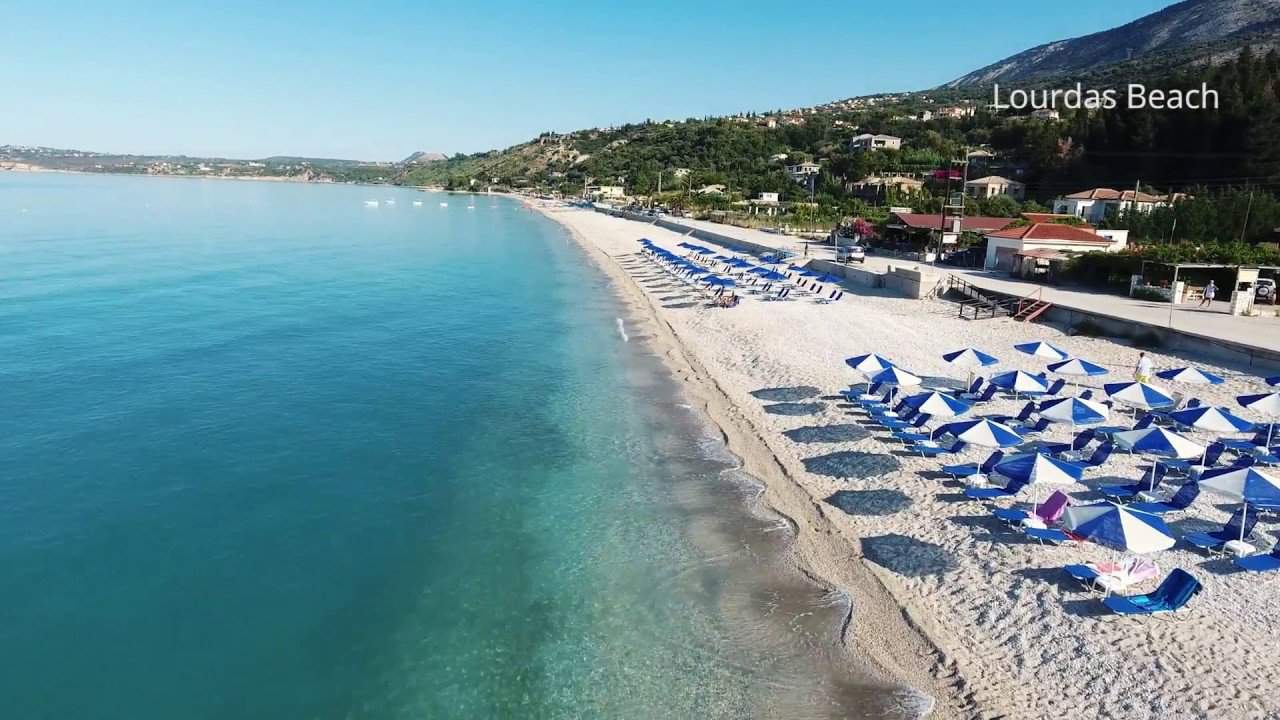 Location: 5,1 km from Hilltop Resort (10 min drive)
Description: The area around Lourdata is a peaceful seaside resort on the south side of Kefalonia. The beach is made of white sand and is equipped with umbrellas and deck chairs. 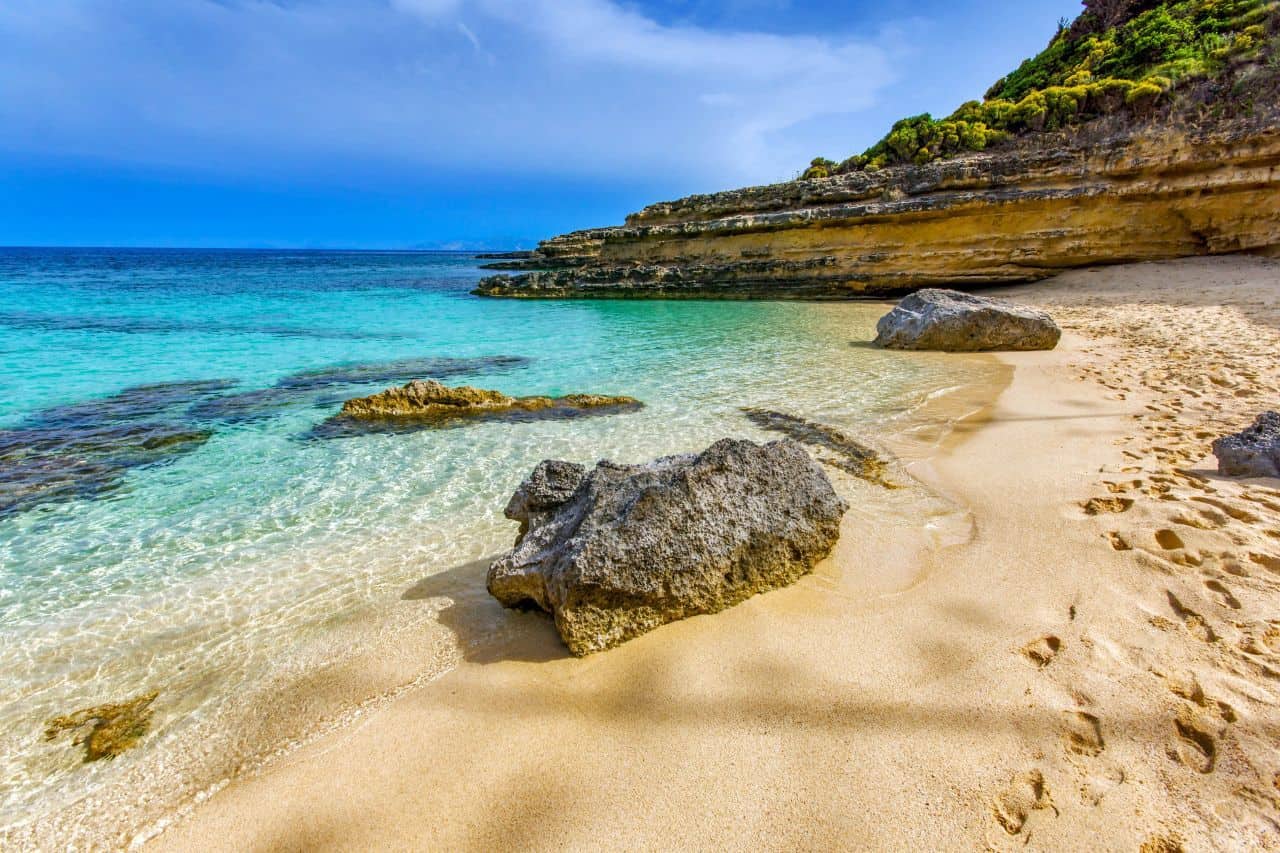 Pessada Kefalonia: Pessada is located  9,9 km from Hilltop resort, and offers a wonderful view over the natural bay and the small fishing boats that moor there. Tourist facilities are not available, but there is ample parking. A path leads you straight to the beach.

The place is ideal for relaxation and quiet moments. This wonderfully undeveloped little bay is made up of soft sand, crystal clear water and rocks that are scattered across the bay. The bay is usually very busy. Nearby is the church of Estravromenos up in town. 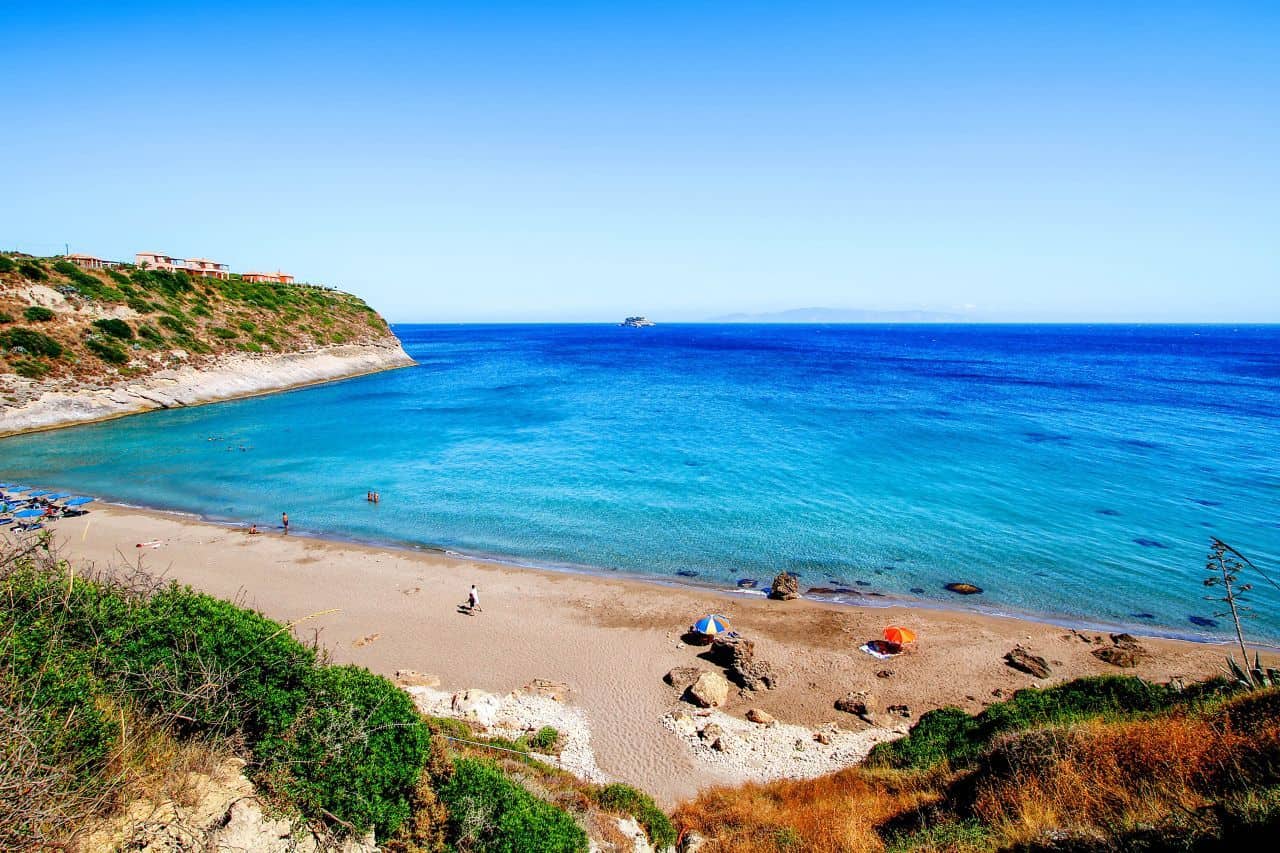 Ai Helis Kefalonia: Ai Helis is located in the southwestern part of Kefalonia, 10 km from Hilltop Resort and near the city of Svoronata. The beach consists of pleasant sand, crystal clear and shallow water, which makes it an ideal environment for children.

It is surrounded on both sides by towering rocks and beautiful lush vegetation that creates a lovely atmosphere. It has a descent development with hammocks and a snack bar, while it is also considered well suited for water sports. The beach has two volleyball courts and is very popular with beach volleyball fans. There is a nice parking lot. From there it is a ten minute walk to the beach. 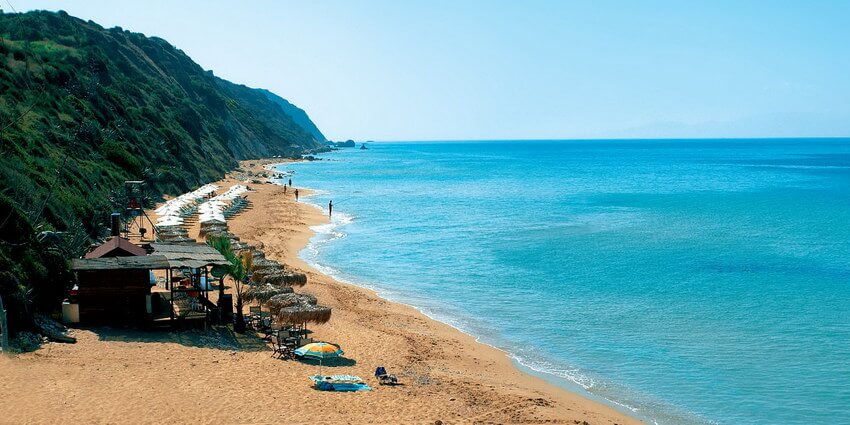 Avithos Kefalonia: Avithos is a very beautiful beach with crystal clear water, 10 km from Hilltop Resort, and very close to the town of Svoronata. The beach is reddish sand and a breathtaking mountain backdrop.

Surrounded by green vegetation and beautiful facilities, Avithos is the ideal environment for children and offers many games in the sand and in shallow water. A few nice tavernas are located near the beach and offer delicious local cuisine.

Avithos Beach has great views of the tiny island of Dias and the little church above. It’s a really nice beach and definitely one of the best on the south coast of Kefalonia. 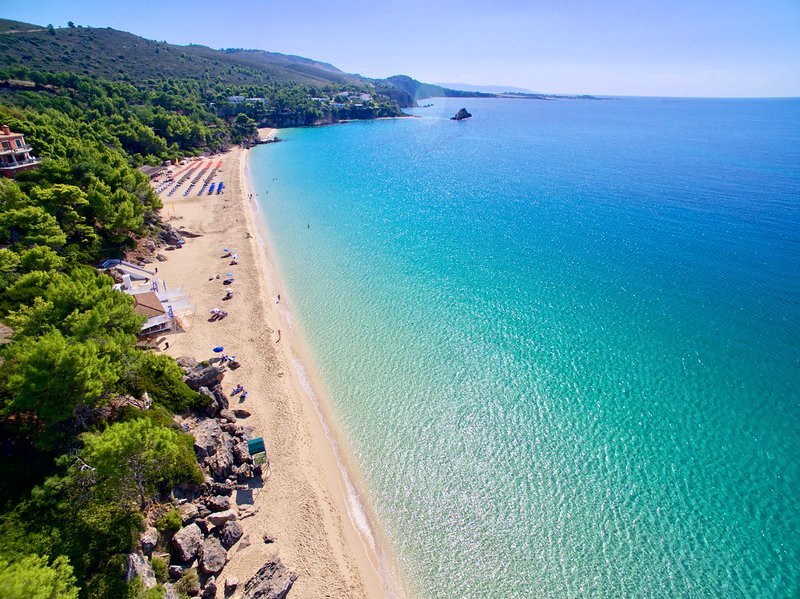 Makris Gialos Kefalonia: Makris Gialos is a beautiful resort that is located around a beautiful, crystal clear bay. It is 3 km south of Argostoli, the capital of Kefalonia. It is one of the most visited beaches in Kefalonia, known for its shiny golden sand and clean blue waters. Like most beaches on the island, Makris Gialos offers a breathtaking landscape with thick vegetation and tall pine trees. Some rock formations are scattered, creating an exotic atmosphere.

Due to its proximity to the capital, Makris Gialos has become a major attraction for Greek tourists and travelers. In summer, the well-organized beach is a famous meeting place. It is easy to get to by all means of transport. There is a beach bar and a water sports center. 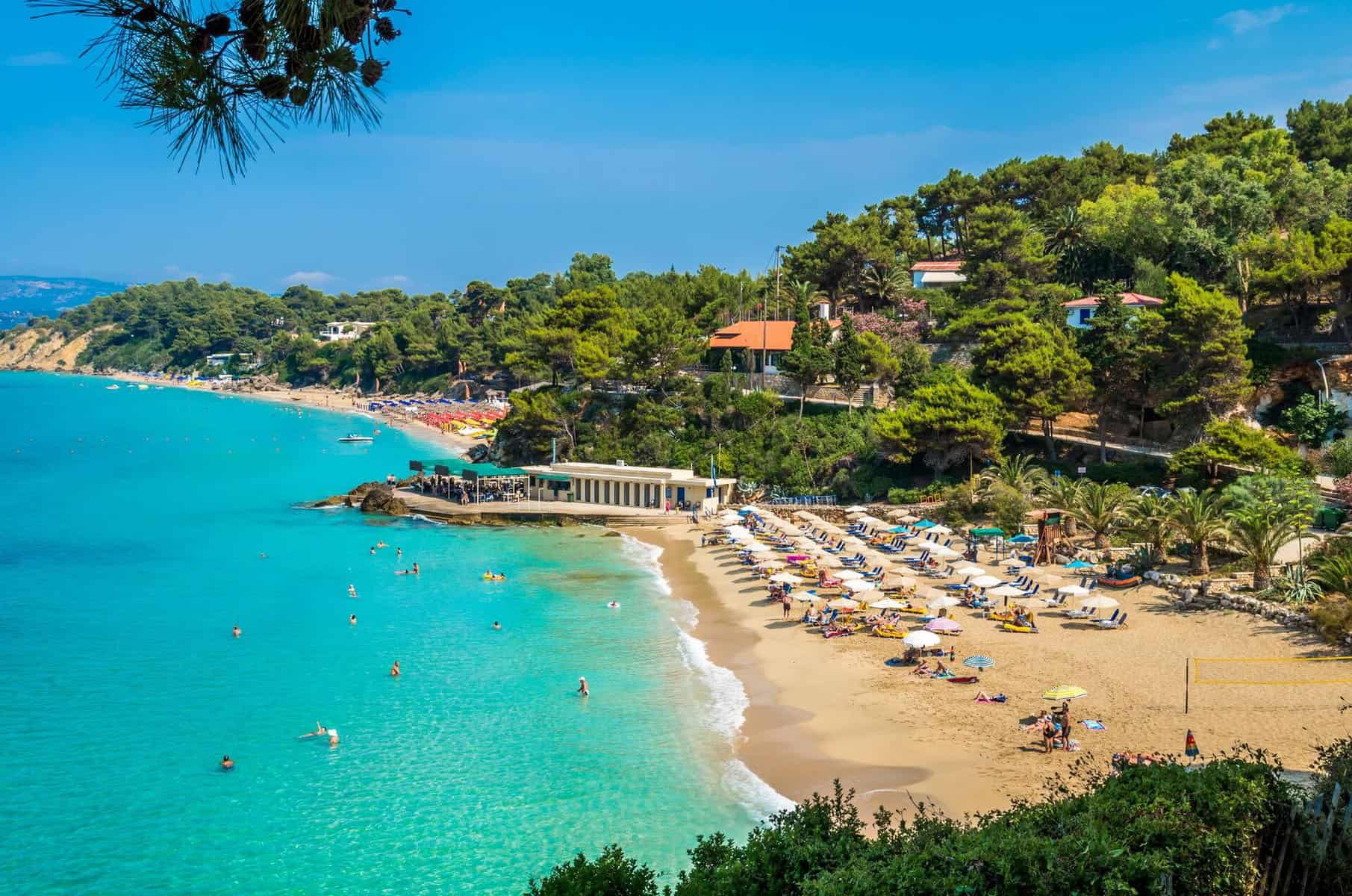 Platis Gialos Kefalonia: Platis Gialos is right next to Makris Gialos and is known for its unspoiled beauty. It consists of white sand and crystal clear water. It is one of the most famous beaches in Kefalonia, very close to Argostoli. The beach concentrates both locals and tourists. The area is surrounded by beautiful surroundings with lush green hills and thick vegetation. The beach was awarded the Blue Flag for its cleanliness and excellent organization. Platis Gialos is an ideal destination for your summer vacation. There are sun loungers and a snack bar on the beach. 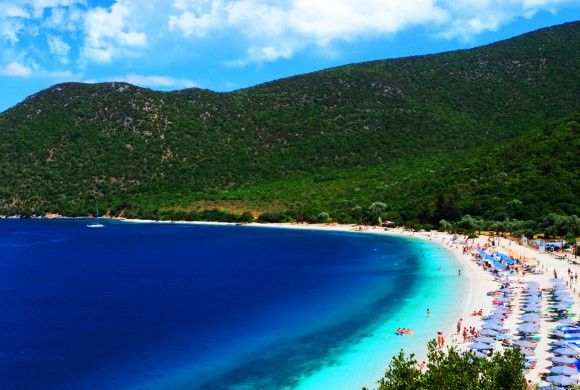 Antisamos Kefalonia: Antisamos Beach is possibly one of the most affordable swimming and sunbathing destinations in Kefalonia. Antisamos is characterized by its natural beauty, which consists of turquoise waters and a wonderful setting of green hills and lush vegetation.

A beach like this could be well organized with umbrellas and terraces. It is this impressive landscape that characterizes this area and captivates all visitors. Antisamos has built a worldwide reputation for the Hollywood film Captain Corelli’s Mandolin, in which some of the scenes were filmed there.

Behind the hill there is a great place for sun and nature lovers. Aside from the beach, which is itself considered to be beautiful tourism, the Agrillion Monastery is at the top of the hill and is well worth a visit. 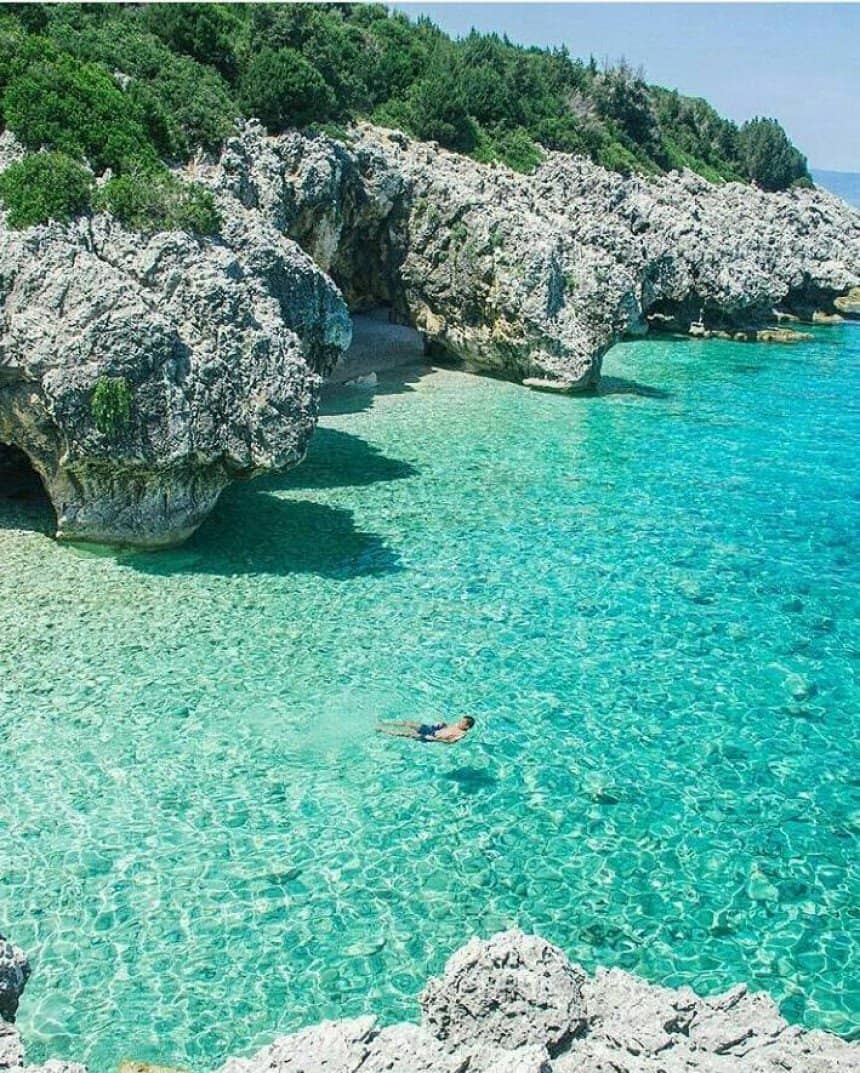 Excellent water and fascinating surroundings make Kato Lagadi an idyllic area to spend some time in on your summer vacation.

Kato Lagadi, also known as Kako Lagadi, is a small sandy bay that lies between two steep rocks with some vegetation. There are no facilities due to its small space, but this beach provides an incredible place to relax and maintain privacy, albeit at certain times. The beach consists of calm blue water and a pebble bank. On the left side of the beach there are some rocks that provide natural shade. 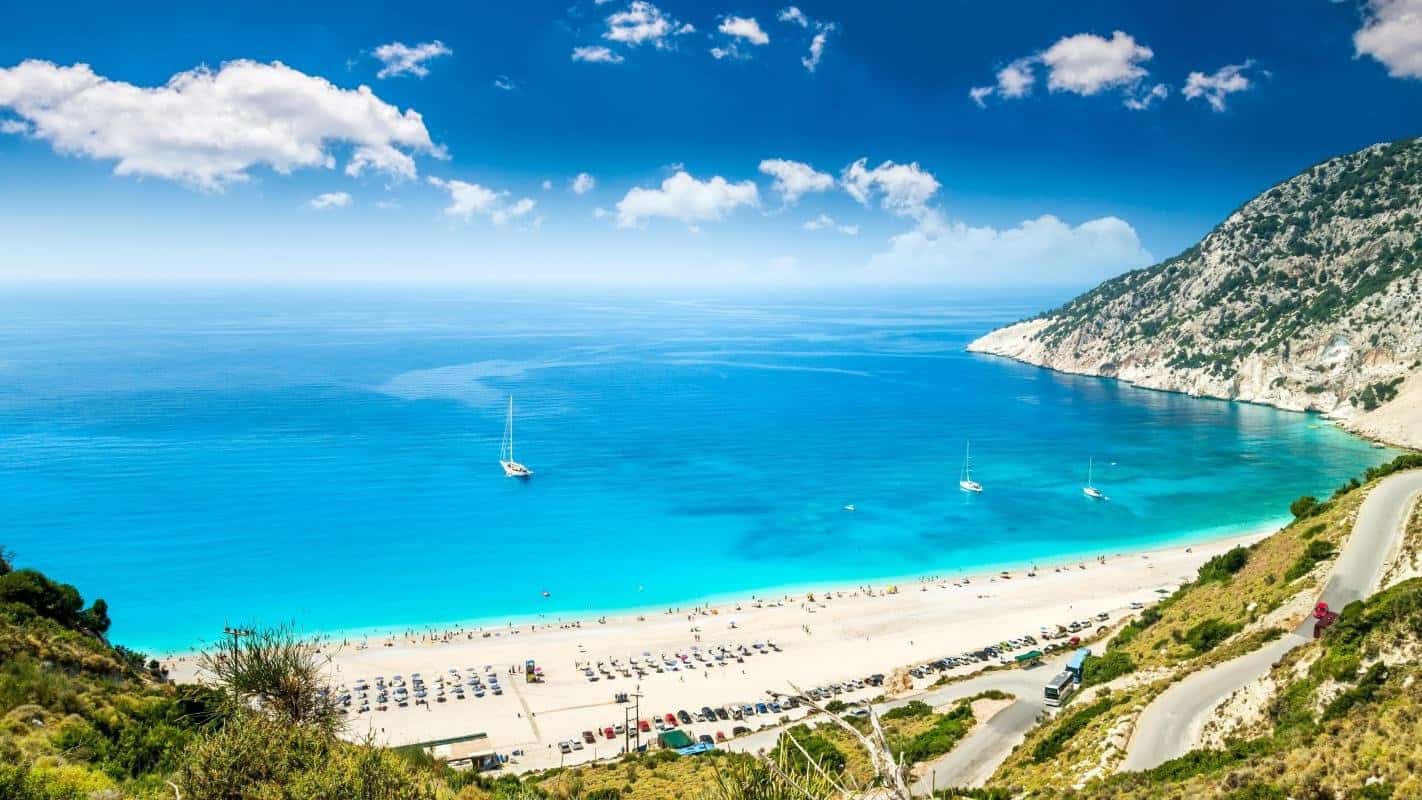 Location: 36 km from Hilltop Resort (31 min drive).
Description: Myrtos is the most famous and beautiful beach in Kefalonia. In reality it is a large coast of turquoise water and white sand, surrounded by sheer cliffs.